“For a nation that suffers from such unreliable summer, Ireland has a remarkably rich and glorious calendar of sports…and that does not even include dipping into Les Musts, the classics of the British season.

“The long, theoretically golden, summers will kick off this week with the Epsom Derby. It will hip hop across the channel to take in Wimbledon, Royal Ascot, the Budweiser Irish Derby, Carroll’s Irish Open Golf, Henley Regatta, the Horse Show at the RDS with the THF race day and the Heinz Stakes turning that weekend into the height of the Irish season” wrote Angela Phelan in the Irish Independent in June 1989.

The Eighties, where toddlers fought with their mothers’ shoulder pads, Charles Haughey was Taoiseach and tobacco companies still sponsored sporting events. The Phoenix Park racecourse only saw one more summer, and closed in 1990. It seems that even then the Irish enjoyed an excuse to get dressed up and have a drink.

“At each of these events the spectators far outnumber the participants and many of them are far more interested in drinking long cool drinks under large straw hats than they are in the sporting victories before them,” Phelan continues.

Across the Irish Sea at the Henley Regatta Gerald Lawless, the then manager of the Shelbourne Hotel, said “some never even catch a glimpse of even the river not to mention the rowing.”

The late Eighties saw the most fantastic picnics appear, where racegoers brought double damask tablecloths and the family silver to put on the humble picnic table on Derby Day at the Curragh racecourse.

“The lobster, poached salmon, rack of lamb and beluga caviar look more like an epicurean feast from John Howard’s Le Coq Hardi and the vintage wine and champagne were chosen with as much case as any self-respecting sommelier,” the article continues. 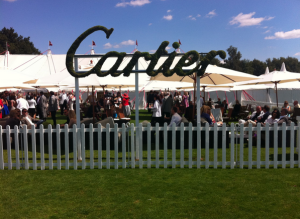 Marianne O’Brien spoke of the benefits that come with not wearing hats, “Last year I enjoyed the Cartier Polo day at Windsor Lawn. Lots of smashing silk dresses and NO hats. It was also great fun.  I think that anyone with any sense would not go to Ascot.”

As our thoughts turn from sinamay to felt and putting firelighters in the trolley, the betting slips from Galway are in the recycling centre, it’s funny how little has changed in 25 years when it comes to getting our kicks.

Enjoying ‘the season’ with a glass of champagne in hand became a national pastime in the heady Celtic Tiger days, but six years after the Fianna Fail tent at Galway was folded up, has our fondness for ‘Les Musts’ returned?