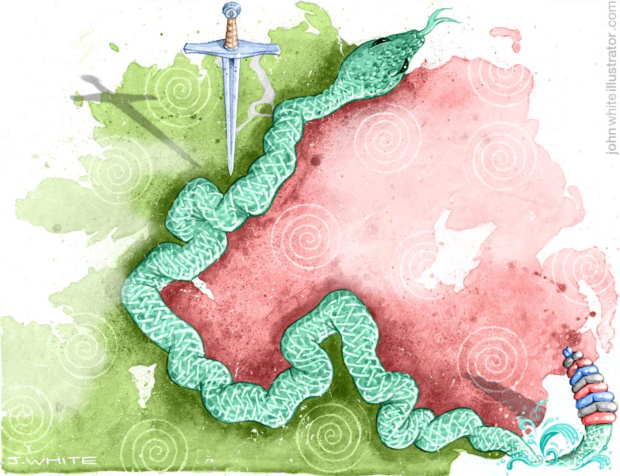 Now fresh from her slumber,
At this road in the fork,
Here she comes,
The Serpent of Dundalk.

She’s almost obscured,
This mythical thing,
Nearing a century of age,
Awake for the land to rearrange.

The high fair brow of Hibernia,
Eyes the blue of Lough Beg,
Her long mountain green spine,
With a red and blue rattle tinkling along her tail.
She sloughs her stiff skin on the sharp, wet rocks of Carlingford bay.

Now slithering from Muff to Omeath,
It’s said she passed hot herbs
at the birth of Cú Chulainn,
Supped with the synod,
Nibbled the tail of Mac Da Tho’s fat pig
Gliding amidst the Cooley cow’s hooves,
She’s now sniffing the green diesel.
Bailieborough is cowboy country,
She has an eye for a deal.

‘Hush, missus, whoever you are, I’ll tell me own story,
There’s good wee deals in ‘Blaney
An odd sup for me in Blacklion
Where yon buckos are well gamey,
I missed the wet shake of change, of coins,
Fresh down from the Ardoyne,
Pounds and punts, now euros
And a strange invisible bit yoke
The boys in Belturbet say it’s good
Where ye’ll find me, which one of us knows’

Stretched into new skin,
Nostrils flared in a Fermanagh fury,
She’s born of the land,
Once more to be manned
The paper of peace treaties,
Fugitives of freedom,
An oddly born species.
Bandits from law,
From the ink of carbon black
Of which there was no coming back,
Til now.

‘To stir me ould bones,
The cold icy sea.
Tell me this, what do they say
About me in Dublin?
What game will they play
To keep me from London?”

‘That’s not for I to say,
I’m afraid, the South has changed.
Fireworks? Yes, but less.
Fags? No, we’ve cut down.
Diesel? Sure lamp it in.’

‘Peace is my middle name, missus,
And what of the childer
Swam here from their death?
Am I to let them pass? Turn enough eyes blind, blinds eyes.’

‘I’m trying to regale your tale,
You snake. I’m a millenial narrator,
I don’t remember the Troubles,
But,
I too have a tongue
For licking British sweets,
For lapping English tea,
Teacake marshmallow sprung from its shell,
Hot Colman’s mustard,
Am I the rebel?
Is it allowed, to be unpatriotic
Canadh chun fáil réidh leo?
Bhuel, táim brónach,But I’ll read Paddington before bed
And buy Megan’s changing bag.’


‘Hould on now missus, you whose tale is this?
The yarn of myself a bould boundary beast,
A strangled urchin of destiny,
I didn’t ask to be born.
But now I’m awake and remembering,
The frost and sweat,
And the tears of murders,
And the petrol of bombs,
And the blood of a woman buying milk,
Good god, put a sword in me heart, will you missus?’

How did she wake, our beast of the border?
Roused from a sleep, deep and black,
The calls of frustration,
A shout for division,
Different sects, across the Irish sea.

‘I no more want to be back,’
She shrugs a scaly shoulder.
And slips out of the sea
‘But that’s that now.’

Originally published in March 17th 2019 in the Sunday Independent.